With the development of industry and the expansion of cities, the concentration of harmful gases in the atmosphere has increased; with technological progress and improvement of life, people’s requirements for pure air have increased. The demand for chemical filters is gradually increasing. Most of the current chemical filters are activated carbon air filters. The V-type activated carbon air filter uses carbon particles with high adsorption beyond activated carbon particles as the filter material. It has a highly developed microporous structure, large adsorption capacity, fast adsorption and desorption speed, and good purification effect. For the removal of odors and higher density gas phase pollutants.

◎The rancid smell and other odors of hospitals and museums.

◎The smell of kitchen and bathroom.

◎The smell of paint in the paint spray workshop.

When the adsorbate is adsorbed by the adsorbent, part of the adsorbate will also be released from the adsorbent, which is called “desorption”. During use, the adsorption capacity will continue to weaken, the desorption will increase, and if it increases to a certain extent, the activated carbon will be scrapped.

Occasionally, heating or steam fumigation can remove the adsorbate from the adsorbent and regenerate the activated carbon.

Service life ─The new activated carbon has high adsorption efficiency, and the efficiency decreases continuously during use. When the concentration of harmful substances downstream of the filter is close to the allowable range, the filter is scrapped. The use time before scrapping is the service life, also known as “penetration time”.

The main factors affecting the adsorption efficiency and service life of the activated carbon filter are: the type and concentration of pollutants, the temperature, pressure, relative humidity, and residence time of the airflow.

In the actual selection, the type of activated carbon and the form of the filter should be determined according to the types of pollutants, the concentration and the air volume to be treated. Activated Carbon filter manufacturers can determine whether activated carbon should be replaced by monitoring changes in contaminant concentrations before and after the filter. However, there is no convenient and practical monitoring method in China at present. Therefore, the user can only determine the service life of the activated carbon filter according to the prescribed cycle or experience.

During use, the resistance of the activated carbon filter does not change, but the weight will increase. An experienced professional can determine the service life of the filter according to the weight change. 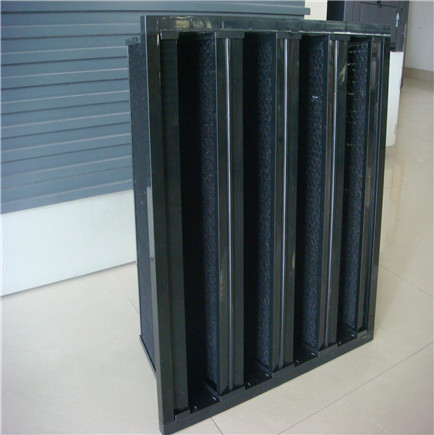 PREV : How to clean the folded primary filter?

NEXT : What are the advantages of a W-type air filter?