What are the types and working principles of HEPA filters?

1.) What is a Pre-Efficient Air Filter and its Role?

The front high-efficiency air filter is generally installed at the front end of the pipeline, so it is named after the word “front”; and “filtering” refers to the basic principle of this type of equipment. Usually a “T” structure. The left and right ends of the “one horizontal” position above are the water inlet and outlet respectively. The “one vertical” position below is the fuselage and the internal cylindrical filter, and the bottom end is the sewage outlet, which is controlled by a valve to open and close. The filter accuracy ranges from 5-300 microns depending on the brand and model. It mainly removes precipitated impurities and bacteria, microbial debris, rust, sand and mud and other particulate impurities larger than 5 microns generated by the pipeline to avoid damage to the human body and skin; Faucets and flowers play an active role in protection, and the pre-efficient air filter can also add “hydrochloric acid complex phosphorus” scale-inhibiting filter element to play a role in inhibiting the scale of solar energy and water heaters.

2.) The Working Principle of Various Pre-Filters

Principle: A large number of micron-sized grooves are engraved on both sides of a thin and specific plastic lamination. When a series of lamination pressures of the same pattern are tightened by springs and liquid pressure on a specially designed inner support, the grooves between the laminations are formed. crossed to form a series of filter elements around 100 microns.

During filtration, the water passes through the laminations from the outside, the filter laminations are tightly pressed together under the action of various hydraulic forces of the spring, the impurity particles are trapped at the intersection of the laminations, and the filtered water flows out from the high-efficiency air filter.

Backwashing state, when a certain pressure difference or time is reached, the system flushes the controller to control the valve to change the direction of the water flow, so that the impurities on the laminations are flushed out.

Principle: Most use 50-100um stainless steel filter screen, through the pressure water of tap water to penetrate from the inner wall of the pipeline to the outer wall, such as sediment, rust, red worms and other impurities are trapped by the membrane holes, open the flush valve to replenish the impurities trapped by the stainless-steel membrane The replenishment water is washed away to realize the washing of the filter element.

Principle: The siphon type front high-efficiency air filter adopts an external pressure type, which penetrates from the outer wall of the pipe to the inside through the pressure of tap water, and particles such as sediment, rust, and red worms are trapped on the surface by the membrane holes, and the flushing switch is turned on. A secondary pressure is formed around the filter element. The built-in water distributor can more effectively remove the dirt and impurities trapped on the filter screen. The impurities trapped on the membrane surface are washed away by the water through the inner pipe of the rain cutter. It is much better in the flushing effect.

Disadvantages: The product structure is complex and the washing is not thorough. For example, the water quality is relatively poor. Some impurities are embedded deeper and tighter in the filter element. Finally, the filter element is blocked, resulting in secondary pollution. Once blocked, it is very difficult to maintain. Most of the production siphon products filter Accuracy is above 50 microns.

Principle: The backwashing front high-efficiency air filter is an “internal pressure type” under normal working conditions. Through the pressure of tap water, it penetrates from the inner wall of the filter to the outer wall, and particulate impurities such as sediment and rust are trapped in the pipe. Open and flush the impurities trapped by the filter screen are washed away by the valve. If the water quality is poor and the consumer does not wash it for a long time, there is no need to worry if it is blocked. Through the backwash switch, the piston is moved to the lower part, and the direction of the water flow is changed to “external pressure type”.

Compared with the previous products, the backwashing front high-efficiency air filter has a great improvement in technology. The structure is reasonable and the water inlet and outlet can be rotated at will. The installation is convenient, and the front body of the water pipe installation in any direction can be kept vertical; The flushing design is reasonable, “forward flushing, recoil flushing as you want” to completely flush out impurities and prevent secondary pollution caused by the accumulation of impurities. The most critical point is that the accuracy can be as low as 5 microns, which is also other pre-efficient air Filters do not have.

(1) Solve the Secondary Pollution of the Pipeline

The front high-efficiency air filter is generally installed behind the water meter, and its main function is to restore the tap water to the standard before leaving the factory and protect the downstream equipment.

The urban water supply pipeline is old and long, and impurities such as rust and sediment in the pipeline will not only lead to brown water and water equipment control failure, such as dripping water from the faucet (currently, the pressure reducing valves on the market are all proportional, and the valve core of the faucet is made of ceramics. Grinding type, fine particles will cause the pressure reducing valve to fail in a short time, resulting in the dripping of the grinding chip ceramic valve core) The heat exchanger pipeline is blocked and ruptured, and impurities will precipitate on the pipeline, on the one hand, it provides bacteria growth. On the other hand, it will form electrical compounds, which can cause corrosion or perforation of metal pipes in just a few months. Impurities such as sediment, rust, floating objects and other impurities greatly extend the service life of subsequent equipment, such as faucets, showers, washing machines, water heaters, toilets… In Germany, the pre-high-efficiency air filter legislation stipulates that all buildings after 1988 must install pre-high-efficiency air filters, so pre-high-efficiency air filters are widely used in the European and American markets.

Scale is not unfamiliar to all consumers. The main components of scale are calcium and magnesium. Although it is not harmful to the human body, the scaling of water heaters, gas water heaters and water heaters will cause corrosion of the water heater liner. The failure of precision controls will cause certain losses to users. To sum up, there are the following hazards: scaling of heating equipment: waste of fuel and reduced thermal efficiency of heating equipment: because the thermal conductivity of scale is dozens of times smaller than that of steel hundred times. Therefore, when scale is deposited, the heat transfer performance of the heating surface will be deteriorated, the heat released by fuel combustion cannot be effectively transferred to the water, and a large amount of heat will be carried away by the surface heat conduction, resulting in an increase in surface temperature and an increase in electrical energy loss. Electricity wasted. Some people estimate that there is 1mm thick scale on the heating surface of the boiler, which wastes about 10% to 15% of electric energy.

Affect the safe operation of electric water heaters: Accidents of electric water heaters are not uncommon, and scale is often formed on heating pipes and boiler heating surfaces with high heat load. Due to the poor thermal conductivity of scale, the local temperature of the metal pipe wall is greatly increased. When the temperature exceeds the allowable temperature that the metal can withstand, the metal will creep due to overheating, and the strength will be reduced. Under the working pressure of the boiler, the metal will bulge, perforate, rupture, and leak, which directly affects the safe operation of the water heater.

The pre-HEPA filter can be added with food-grade slow-release double phosphate, which can react with calcium and magnesium ions in water to prevent the combination of calcium and magnesium ions with silver carbonate ions, so as to play a role in scale inhibition and can form a dynamic nano-scale protective film on the inner wall of the water storage tank, which can prevent and repair the corrosion of the inner wall of pipes and containers.

(3) Can Be Used as a Pre-Processor for Water Purifiers

General water purifiers currently commonly used pre-processors are made of PP cotton, and its filtration accuracy is claimed to be between 1-50 microns. The main purpose is to prolong the service life of the rear filter element. Due to the high frequency of replacement and the inability of the filter element to achieve backwashing, its function has a tendency to be replaced by the front high-efficiency air filter. (But because of its low cost, it is still widely used. The problems of PP cotton: the replacement cycle is relatively short, the price is transparent, and there is no profit margin; after the accumulation of impurities, it cannot be discharged in time, causing secondary pollution, which is easy to breed bacteria; most PP cotton is made of transparent material, which is easy to grow moss. 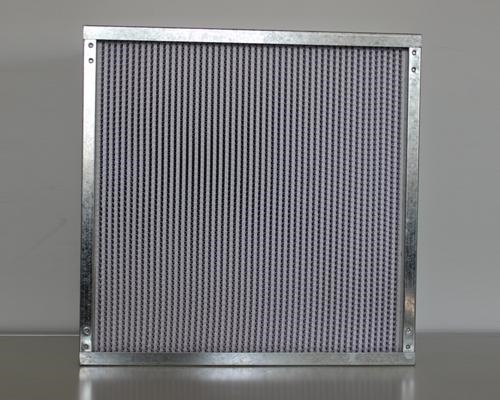 PREV : What are the application industries of medium efficiency filters?

NEXT : What is filter cotton?