What are the principles of air filters?

1.) The air filtration technology mainly adopts the filtration separation method: by setting filters with different performances, the suspended dust particles and microorganisms in the air are removed, that is, the dust particles are captured and intercepted by the filter material to ensure the cleanliness of the incoming air volume. Require. The filter material used in it is relatively fine-diameter fiber, which can not only allow the airflow to pass through smoothly, but also effectively capture dust particles.

2.) The dust controlled and filtered by the clean technology is generally 0.1-10μm dust particles, with a small particle size, including solid particles and liquid particles; the organic particles suspended in the atmosphere include microorganisms, plant pollen, tidbits and fluff, microorganisms Typically includes viruses, rickettsia, bacteria, fungi, protozoa and algae. Air purification controls are mainly bacteria, fungi and viruses. Because microorganisms are mainly attached to the dust particles, effectively controlling the dust particles in the air can also effectively control the bacteria, fungi and viruses in the air. To do this, it must pass through a particulate filter with a barrier property before it can be filtered. In general, the filtration efficiency of ordinary high-efficiency filters for bacteria can reach 99.996%, which can basically meet the filtration and purification requirements of biological clean rooms.

1.) Interception effect: When a particle of a certain size moves to the vicinity of the fiber surface, the distance from its center line to the fiber surface is less than the particle radius, and the dust particles will be intercepted by the filter material fiber and deposited.

2.) Inertial effect: When the mass of the particles is large or the speed is large, they collide on the surface of the fiber due to inertia and deposit.

3.) Diffusion effect: particles with small particle size have strong Brownian motion and are easy to collide with the fiber surface.

4.) Gravity effect: When the particles pass through the fiber layer, they are deposited on the fibers due to gravity sedimentation. 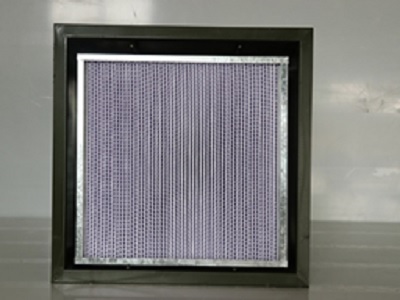 PREV : Do you know the working principle of primary, medium and high efficiency air filters?

NEXT : What is the common sense of air filter?